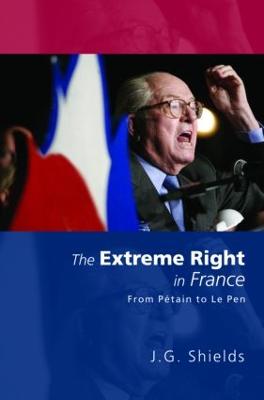 The Extreme Right in France

From Petain to Le Pen

Description - The Extreme Right in France by James Shields

A comprehensive new historical study of the extreme right in France, from the Vichy regime to the present day.

The Front National has for some years been France's third political party and the most significant extreme-right force in Europe; its leader, Jean-Marie Le Pen, contested the second round of the 2002 presidential election with 5.5 million votes.

This wide-ranging and authoritative book examines the resurgence of right-wing extremism in France from a historical perspective, tracing the political lineage of Le Pen and the FN through key figures and movements on the French extreme right since 1940. Part 1 devotes chapters to the Vichy regime, the aftermath of the Occupation, the Poujadist movement, the Algerian War, the 'Nouvelle Droite', and extreme-right ideology and activism in the 1960s and 1970s. Part 2 analyzes the electoral rise of the FN, its evolving programme and exploitation of salient issues, the geography and sociology of its electorate, its exercise of local power, and its impact on national political culture in contemporary France. The FN, it is argued, represents both the latest manifestation of a long tradition of right-wing radicalism and a complex new phenomenon within the changing social and political dynamics of France today.

This is an essential book for all readers with an interest in French and European politics and modern history.

Other Editions - The Extreme Right in France by James Shields 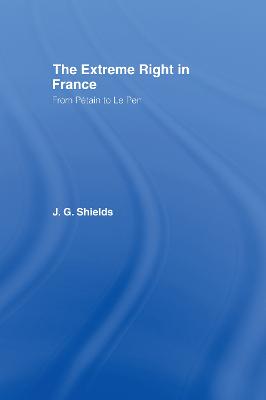 A Preview for this title is currently not available.
More Books By James Shields
View All

Border Wars of Texas: Being an Authentic and Popular Account, in Chronological Order, of the Long and Bitter Conflict Waged Between Savage Indian Tribes and the Pioneer Settlers of Texas
James T De Shields
Paperback , Oct '18
RRP: $69.33 $62.40