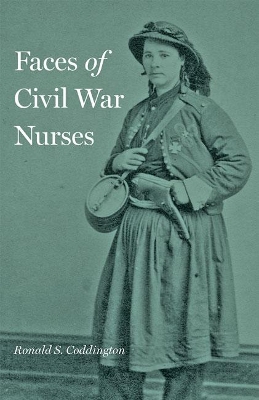 A collection of rare archival images and biographical sketches of the dauntless women who served as nurses and caregivers during the Civil War.

During the American Civil War, women on both sides of the conflict, radiating patriotic fervor equal to their male counterparts, contributed to the war effort in countless ways: forming charitable societies, becoming nurses, or even marching off to war as vivandieres, unofficial attaches to the regiments.

In Faces of Civil War Nurses, Ronald S. Coddington turns his attention to the experiences of 77 women of all ages and walks of life who provided care during the war as nurses, aid workers, and vivandieres. Their personal narratives are as unique as fingerprints: each provides a distinct entry point into the larger social history of the brutal and bloody conflict. Coddington tells these determined women's stories through letters, diaries, pension files, and newspaper and government reports. Using identified tintypes and cartes de visite of women on both sides of the war, many of them never before published, Coddington uncovers the personal histories of each intrepid individual. Following their postwar stories, he also explains how the bonds they formed continued long after the cessation of hostilities.

The fifth volume in Coddington's series on Civil War soldiers, this captivating microhistory will appeal to anyone with an interest in the Civil War, women's studies, social history, nursing, or photography.

"An engaging look at a neglected part of the history of the American Civil War."-Booklist

"Coddington has hit upon a unique and fascinating niche in the seemingly endless march of Civil War books."-C&RL News

"A lavishly produced visual record of southern Civil War soldiers . . . will appeal to serious photography enthusiasts and collectors, as well as those readers captivated by the personal stories of Civil War soldiers."-Civil War Books and Authors

"Coddington's prose is as unpretentious as the faces he shares, yet authoritative. It resurrects details that broaden our understanding of those sad times and sheds valuable light on the shape of modern culture."-Atlanta Constitution

"Even at a distance of over a hundred years, the faces staring out of these pages create an undeniable emotional connection with the reader. This book is highly recommended."-H-CivWar, H-Net Reviews

"A fascinating window into the war's impact on the individual soldier . . . well researched and engagingly written. Any teacher of the Civil War would do well to consult this volume and incorporate some of the captivating tales into lectures and readings."-Journal of Military History

A Preview for this title is currently not available.
More Books By Ronald S. Coddington
View All