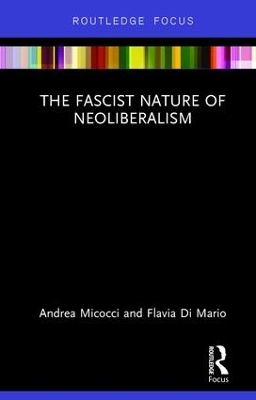 The Fascist Nature of Neoliberalism

Description - The Fascist Nature of Neoliberalism by Andrea Micocci

Capitalism is based on a false logic in which all facts and ideas are reduced to a consideration of their 'feasibility' within the capitalist system. Thus, all mainstream economic and political theories, including those such as Marxism which are supposed to offer an alternative vision, have been stunted and utopian ideas are completely side-lined. In order to constantly work out the feasible, you have to hang on to pseudo-factual concepts: nationalism; a constant drive for efficiency; the idea of nation/state; corporatism; managed markets; business ethics; governance etc. Capitalism is reduced to the management of the economy by states that fight each other and marvel at the independence of finance. All this, the book argues, is akin, intellectually, economically, politically, and unfortunately individually, to fascism.

The Fascist Nature of Neoliberalism offers a brief, provocative analysis of this issue with special reference to the most visible executioners of its will: the much-misunderstood managerial class. This group simply happens to hold power, and hence visibility, but they do what everybody else does, and would do, all the time. This is because capitalism is an intellectual outlook that thoroughly directs individual actions through fascist and non-fascist repression. This book argues that the only way to escape capitalism is to recover individual intellectual and sentimental emancipation from capitalism itself in order to produce radical solutions.

This volume is of great importance to those who study and are interested in political economy, economic theory and philosophy, as well as fascism and neoliberalism.

A Preview for this title is currently not available.
More Books By Andrea Micocci
View All