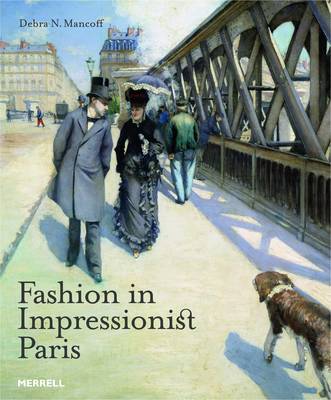 ***SPECIAL PRICE down from $75.00 while stocks last*** Even before the advent of haute couture, Paris was a great centre of fashion. During the second half of the nineteenth century, when the capital was transformed by an ambitious urban plan, its residents responded in kind, wearing styles as polished and modern as the city itself in order to participate in the exciting new social scene. Featuring famed paintings by such Impressionist masters as Degas, Cassatt, Manet, Monet and Morisot, this delightful book revisits the world of Parisian fashion through the eyes of first-hand observers. Thematic chapters present a gallery-like ensemble of paintings that follow in the footsteps of stylish Parisians as they stroll in the parks and boulevards, meet friends at cafes, take in the theatre, relax at home and go on holiday. In an extended narrative-style caption to accompany each image, fashion and art historian Debra N. Mancoff offers a detailed discussion of what men and women wore and how their dress defined them. To complete the picture, illustrated interludes, providing glimpses into dressmaking, corsetry and millinery, the origins of couture and the rise of the department store, reveal how Paris became the fashion capital of the world. AUTHOR: Debra N. Mancoff is Adjunct Professor of Art History, Theory and Criticism at the School of the Art Institute of Chicago. Her publications include 'Van Gogh's Flowers' (1999), 'Monet's Garden in Art' (2001) and 'Flora Symbolica: Flowers in Pre-Raphaelite Art' (2003). She lectures regularly at many of the major museums in the United States and Great Britain. SELLING POINTS: . The first in-depth survey of fashion in Impressionist painting . Provides fresh insight into some of the most popular paintings of the nineteenth century 80 colour illustrations

A Preview for this title is currently not available.
More Books By Debra N. Mancoff
View All