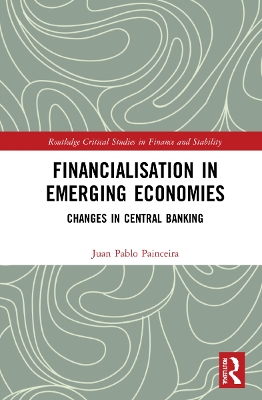 Since the beginning of the 2000s, emerging market economies, or middle-income countries, have embarked on major changes in their domestic financial systems. These changes - in which central banks have been key players - are shaped by the process of financialisation, which can generally be characterised by the dominance of financial considerations in the conduct of major agents (banks, non-financial corporations and households). As a consequence of the emerging markets crisis at the end of the 1990s, a new phenomenon in global financial markets emerged: a massive accumulation of foreign reserves in emerging economies. This has had important consequences for the global economy in which developed economies are the major beneficiaries.

Based on Marxist political economy, this book studies the trends towards financialisation in emerging economies, focusing on the effects of the reserve accumulation in their international and domestic spheres. It argues that reserve accumulation has been the very catalyst of financialisation, being related to the subordinated position of emerging economies in the international monetary system. The chapters explore how these trends were exacerbated by the 2008 global financial crisis as well as the extraordinary monetary measures undertaken by the major central banks to deal with the effects of this. Foreign investors invested an enormous amount into emerging economies between 2010 and 2012 and emerging-market financial assets have doubled since 2008. To conclude, the book discusses how the US monetary policy normalisation has added more complexity to these trends since 2013 by putting pressure on emerging markets related to the level of global liquidity.

This book provides essential reading for students and scholars of finance, economics and political economy who are interested in the unfolding of the subordinated financial integration of emerging economies into global financial markets.