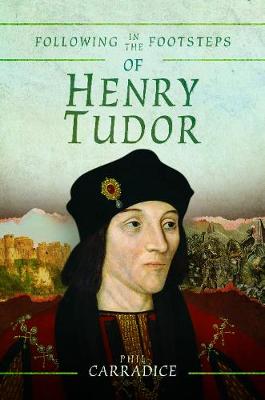 Following in the Footsteps of Henry Tudor: A Historical Guide from Pembroke to Bosworth

Description - Following in the Footsteps of Henry Tudor: A Historical Guide from Pembroke to Bosworth by Phil Carradice

The story of Henry Tudor's march to Bosworth and the throne of England began long before the fatal summer of 1485, with his birth in Pembroke Castle. The gigantic fortress where he spent his childhood years lay some 12 miles inland from the spot where Henry was supposed to have landed in Milford Haven when he came to challenge Richard III in August 1485. Henry's landing and progress to Bosworth Field were a gamble, but by 1485 the last of the Lancastrian princes had little option but to 'chance his arm'. He had worn out his welcome on the Continent and, despite his unpopularity in some quarters of English society, there was the real risk that Richard's reign might finally begin to create stability and financial success - Yorkist stability and success. A gamble, yes, but one that had to be taken if the House of Lancaster was to survive. In Following in the Footsteps of Henry Tudor, we hear of the many fascinating stories from Henry's march and the places he visited - a journey that took just over two weeks. It was a time of treachery and double dealing but it culminated with the establishment of the Tudor dynasty, the end of the Wars of the Roses and the beginnings of the modern world. AUTHOR: Phil Carradice is a well-known writer and historian with over 60 books to his credit. A poet, story teller and broadcaster, his most recent books are "The Cuban Missile Crisis" (for Pen and Sword), "The Call Up" (Fonthill) and the novel "Stargazers" for Accent Press. He is a regular broadcaster on BBC Radio and TV, presents the BBC Wales History programme "The Past Master" and is widely regarded as one of the finest creative writing tutors in Wales. 20 b/w illustrations

Buy Following in the Footsteps of Henry Tudor: A Historical Guide from Pembroke to Bosworth by Phil Carradice from Australia's Online Independent Bookstore, BooksDirect.

A Preview for this title is currently not available.
More Books By Phil Carradice
View All