Foo Fighters: The Band that Dave Made

Description - Foo Fighters: The Band that Dave Made by Stevie Chick

From the ashes of Nirvana, Dave Grohl rose as a one-man band with a self-titled album: The Foo Fighters. Now, 25 years on and with a rock solid outfit that includes Nate Mendel (bass), Taylor Hawkins (drums), Chris Shiflett (guitar) Pat Smear (rhythm guitar) and latest addition, Rami Jaffee (keyboards) The Foo Fighters are reveling in the success of their ninth studio album, Concrete and Gold. Paying homage to the band's enduring longevity, The Foo Fighters: The Band That Dave Made is a comprehensive look at a career that boasts worldwide sales of more than 30 million albums, ten Grammies and hit stadium rock anthems such as Learn to Fly, Best of You and Everlong. Illustrated throughout, this handsome biography from acclaimed rock writer, Stevie Chick, is a fitting tribute to a band born out of 'the nicest guy in rock's' single-minded vision and now one of the planet's biggest rock groups. AUTHOR: Stevie Chick has been writing about music for over a decade, contributing to titles like MOJO, The Guardian, NME, The Times, The Quietus, Kerrang!, Melody Maker, Sleaze Nation and Plan B. He is also the author of Psychic Confusion: The Sonic Youth Story (Omnibus), Ninja Tune: 20 Years Of Beats And Pieces (Black Dog) and Spray Paint the Wall: The Story of Black Flag (Omnibus). SELLING POINTS: Published to coincide with the 25th anniversary of their founding by Dave Grohl in 1994, following the death of Kurt Cobain Stunningly illustrated with essential images, including unseen behind-the-scenes stills 150 colour images

Other Editions - Foo Fighters: The Band that Dave Made by Stevie Chick 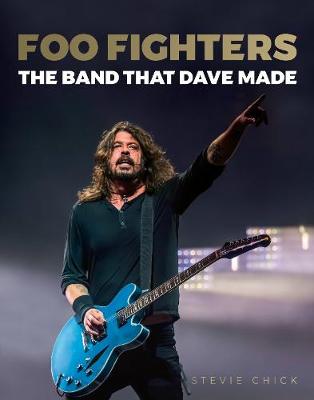 A Preview for this title is currently not available.
More Books By Stevie Chick
View All