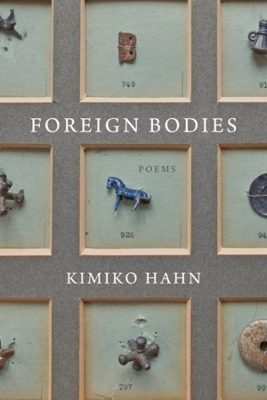 Inspired by her encounter with Dr. Chevalier Jackson's collection of ingested curiosities at Philadelphia's MA1/4tter Museum, Kimiko Hahn's tenth collection investigates the grip that seemingly insignificant objects exert on our lives. From fossilized remains to the heartbreaking detritus of her family home to her long-dead mother's Japanese jewelry, these poems movingly explore the relationship between our innermost selves and the relics of our vanished past. Foreign Bodies investigates the power of possession, replete with Hahn's singular Japanese- inflected sensibility and thrilling mastery of ever-changing forms.

From "A Dusting"
How ever Mother has reappeared
- say, as motes on a feather duster-
scientists say the galaxy
was created thus. This daybreak
she seeds a cumulus cloud.

A Preview for this title is currently not available.
More Books By Kimiko Hahn
View All