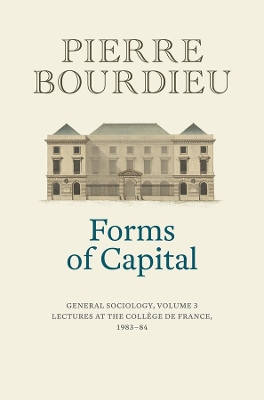 This is the third of five volumes based on the lectures given by Pierre Bourdieu at the College de France in the early 1980s under the title General Sociology. In these lectures, Bourdieu sets out to define and defend sociology as an intellectual discipline; in doing so he introduces and clarifies all the key concepts for which he has become so well known, concepts that continue to shape the way that sociology is practised today.

In this volume, Bourdieu focuses on one of these key concepts, capital, which forms part of the trilogy of concepts - habitus, capital, field - that define the core of his theoretical approach. A field, as a social space of relatively durable relations between agents and institutions, is also a site of specific investments, which presupposes the possession of specific forms of capital and secures both material and symbolic profits. While there are many different forms of capital, two are fundamental and effective in all social fields: economic capital and cultural capital. These and other forms of capital exist only in relation to the fields in which they are deployed: the distribution of the forms and quantities of capital constitutes the structure of the field within which agents act and they confer power over the field, over the mechanisms that define the functioning of the field and over the profits engendered in the field - over, for example, the transmission of cultural capital in the educational system.

An ideal introduction to one of Bourdieu's most important concepts, this volume will be of great interest to the many students and scholars who study and use Bourdieu's work across the social sciences and humanities, and to general readers who want to know more about the work of one of the most important sociologists and social thinkers of the twentieth century.

A Preview for this title is currently not available.
More Books By Pierre Bourdieu
View All