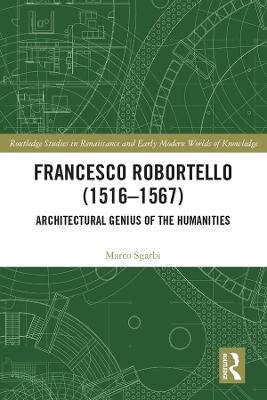 This book explores the intellectual world of Francesco Robortello, one of the most prominent scholars of the Italian Renaissance. From poetics to rhetoric, philology to history, topics to ethics, Robortello revolutionised the field of humanities through innovative interpretations of ancient texts and with a genius that was architectural in scope. He was highly esteemed by his contemporaries for his acute wit, but also envied and disparaged for his many qualities. In comparison with other humanists of his time such as Carlo Sigonio and Pier Vettori, Robortello had a deeply philosophical vein, one that made him unique not only to Italy, but to Europe more generally. Robortello's role in reforming the humanities makes him a constituent part of the long-fifteenth century. Robortello's thought, however, unlike that of other fifteenth-century humanists, sprung from and was thoroughly imbued with a systematic, Aristotelian spirit without which his philosophy would never have emerged from the tumultuous years of the mid-Cinquecento. Francesco Robortello created a system for the humanities which was unique for his century: a perfect union of humanism and philosophy. This book represents the first fully fledged monograph on this adventurous intellectual life.

Other Editions - Francesco Robortello (1516-1567): Architectural Genius of the Humanities by Marco Sgarbi A Preview for this title is currently not available.
More Books By Marco Sgarbi
View All