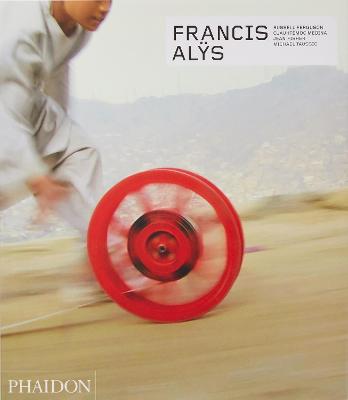 "A leaking can of paint in hand, the artist strolls out of the gallery and drifts aimlessly through the city, leaving a trail of colour as he goes. So what kind of artwork is The Leak (1995)? In one sense it's a painting, but a painting too large for any museum. It's also a performance, though one without an audience. Perhaps most of all, it's an invitation to take the artist's line for a walk, to explore the same path through the city, to breathe the same air and take in the same sights - and in so doing, to eliminate once and for all the division separating art from life. With humour, sensitivity and an acutely personal connection to his subject matter, Francis Alys (b. 1959) examines the patterns of various urban sites before weaving his own fables into their tangled social fabric. From that point onward, the fables take on a life of their own. A scene as such as a Volkswagen Beetle struggling up a hill in Tijuana (Rehearsal I, 1999-2001) or a man pushing a block of ice in Mexico City (Paradox of Praxis 1, 1997) can carry a message that resonates far beyond the work's simple parameters. As the subtitle of his walking piece The Green Line (2004) puts it, 'Sometimes doing something poetic can become political, and sometimes doing something political can become poetic.' Originally from Belgium but based in Mexico City for the last twenty years, Francis Alys is a truly international artist. He has realized works in such diverse locations as Copenhagen, Lima and Jerusalem, and his work has also been exhibited at the world's top museums - including Tate Modern in London, Castello de Rivoli in Turin and the Museum of Modern Art in New York - and featured in the most significant international biennials - Sao Paulo (1998, 2005), Istanbul (1999, 2001) and Venice (1999, 2001, 2007, 2017) to name a few. In the Interview, Russell Ferguson asks how the artist's identity as a cultural outsider has helped determine the remarkable path of his art over the years. Cuauhtemoc Medina's Survey identifies the threads that run through the artist's oeuvre while also sketching a political and social picture of Mexico City, the inspiration and setting for so many of his artworks. In the Focus, Jean Fisher examines the political heart of Alys's massive collaborative Land art project When Faith Moves Mountains (2002). In the Artist's Choice, Augusto Monterroso's short tales capture the artist's enduring fascination with the role animals and fables play in human society, while Alys's own writings uncover the poetry in everyday phrases and seemingly spontaneous arrangements of urban life."

A Preview for this title is currently not available.
More Books By Russell Ferguson
View All