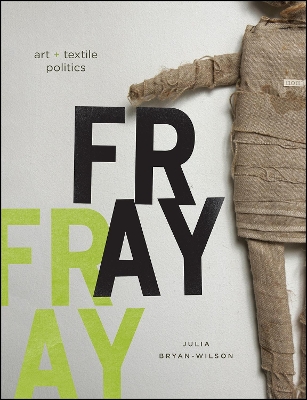 In 1974, women in a feminist consciousness-raising group in Eugene, Oregon, formed a mock organization called the Ladies Sewing Circle and Terrorist Society. Emblazoning its logo onto t-shirts, the group wryly envisioned female collective textile making as a practice that could upend conventions, threaten state structures, and wreak political havoc. Elaborating on this example as a prehistory to the more recent phenomenon of "craftivism"-the politics and social practices associated with handmaking-Fray explores textiles and their role at the forefront of debates about process, materiality, gender, and race in times of economic upheaval.

Closely examining how amateurs and fine artists in the United States and Chile turned to sewing, braiding, knotting, and quilting amid the rise of global manufacturing, Julia Bryan-Wilson argues that textiles unravel the high/low divide and urges us to think flexibly about what the politics of textiles might be. Her case studies from the 1970s through the 1990s-including the improvised costumes of the theater troupe the Cockettes, the braided rag rugs of US artist Harmony Hammond, the thread-based sculptures of Chilean artist Cecilia Vicuna, the small hand-sewn tapestries depicting Pinochet's torture, and the NAMES Project AIDS Memorial Quilt-are often taken as evidence of the inherently progressive nature of handcrafted textiles. Fray, however, shows that such methods are recruited to often ambivalent ends, leaving textiles very much "in the fray" of debates about feminized labor, protest cultures, and queer identities; the malleability of cloth and fiber means that textiles can be activated, or stretched, in many ideological directions.

The first contemporary art history book to discuss both fine art and amateur registers of handmaking at such an expansive scale, Fray unveils crucial insights into how textiles inhabit the broad space between artistic and political poles-high and low, untrained and highly skilled, conformist and disobedient, craft and art.