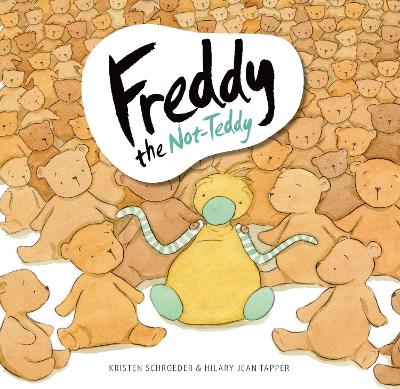 Freddy is certainly not a Teddy, but that won't stop him from being the star of the Teddy Bears' Picnic in this inspiring story about inclusion, friendship and staying true to yourself.

Freddy is Jonah's favourite stuffed toy, but no one knows quite what Freddy is - a funky duck, a peculiar platypus, a punk rock penguin? When Jonah's teacher announces that they're going to have a Teddy Bears' Picnic, it seems that if Jonah wants to take Freddy, Freddy will have to go in disguise!

Jonah and Freddy try all of their best Teddy Bear disguises, but nothing can quite cover up the fact that Freddy is a little different. What should Jonah do? He loves Freddy, but should he still take Freddy to the picnic if he doesn't look like all the other teddies?

Find out what happens when Jonah stands up for himself and for his beloved Freddy in a heart-warming story that will resonate with any child who has ever felt like they're a little different. A celebration of inclusivity and being kind to others, Freddy the Not-Teddy will inspire young readers to express themselves just as they are!

A Preview for this title is currently not available.
More Books By Kristen Schroeder
View All