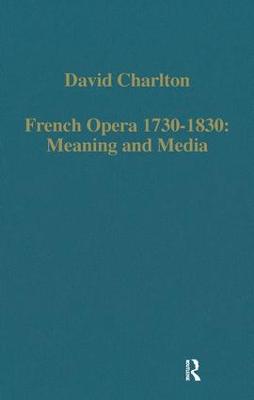 Drawing upon archival research and musicological theory, these essays investigate distinctive qualities in French opera from early opera comique to early grand opera. "Media" is interpreted in terms of both narrative systems and practical theatre resources. One group of essays identifies narrative systems in "minuet-scenes", in the diegetic romance, and in the special uses of musical motives. Another group concerns the theory and aesthetics of opera, in which uses of metaphor help us interpret audience reception. A third group focuses on orchestral and staging practices, brought together in a new theory of the "melodrama model" linking various genres from the 1780s with the world of the 1820s. French opera's relation with literature and politics is a continuing theme, explored in writings on prison scenes, Ossian and public-private dramaturgy in grand opera. The selection of David Charlton's presented here focuses on the period 1730-1830, when Paris was a hotbed of influential ideas in music and music theatre, with many of these ideas taken up by foreign composers.
This volume assesses the French contribution to the development of Classical and Romantic styles and genres which has hitherto been neglected in the literature.

A Preview for this title is currently not available.
More Books By David Charlton
View All