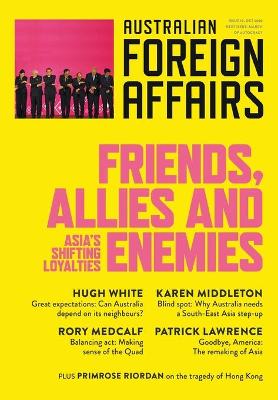 In a changed world, how do Australia's alliances, friendships and rivalries help and hinder us?

"These are anxious times. Not since early 1942 have Australians felt so in need of allies, yet been so unsure of their major ally ... Canberra is eagerly, even desperately, looking for new protectors." HUGH WHITE
The tenth issue of Australian Foreign Affairs examines the alliances, blocs and rivalries emerging across the Asia-Pacific as nations adjust to the changing balance of power.
Friends, Allies and Enemies considers Australia's diplomatic options as loyalties shift in an increasingly turbulent region.
Hugh White argues that Australia's plan for countering Chinese ambitions - building new alliances in Asia - is destined to fail.
Rory Medcalf considers the potential of multilateral forums such as the Quadrilateral Security Dialogue.
Karen Middleton examines how foreign aid and diplomacy can strengthen ties with our neighbours.
Patrick Lawrence calls on Australia to bid farewell to US influence in the Asia-Pacific and embrace an Asian-led regional order.
Allan Behm proposes a bold new Pacific aid donors' conference led by Australia.
Primrose Riordan details the rapacious effects of China's new security law in Hong Kong.
Timothy J. Lynch examines the challenges ahead for the United States.
Renee Fry-McKibbin surveys capitalism's failure in the midst of COVID-19.
Sophie Chao reports on the West Papuan struggle for independence.
PLUS Correspondence on AFA9- Spy vs Spy from John Hewson, Jenny McAllister, Lesley Seebeck and more.