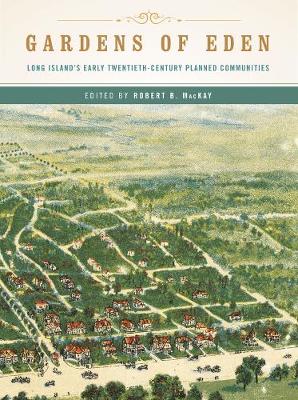 Description - Gardens of Eden by Robert B. MacKay

Edited by SPLIA's former director, Dr. Robert B. MacKay, Gardens of Eden is an exploration of a distinct type of suburban development that proliferated across the region before zoning regulations were developed to manage land use in New York City and its environs. While the onset of suburbia on Long Island is often believed to be a post-World War II phenomena, it actually began a half century earlier when greater affluence, improved railroad service, and new methods of financing made the dream of country living a greater reality for a growing urban middle class. Luminaries such as Grosvenor Atterbury, Charles W. Leavitt Jr., and Frederick Law Olmsted designed dozens of high-end, carefully conceived communities on New York's Long Island. Touted as an antidote to the complexities of urban living, these "residential parks" were characterized by significant investment in landscaping and infrastructure and employed concepts introduced by the Garden City movement in England.Gardens of Eden covers the history and development of more than twenty of these remarkable communities and the colorful, at times unscrupulous personalities behind them-like Plandome, designed "for teachers only," and the Metropolitan Museum's Munsey Park, where all the streets were named for artists-with writings from their most knowledgeable historians. Other featured communities include: Garden City, Forest Hills Gardens, Long Beach, Great Neck Estates, Brightwaters, Montauk Beach, Prospect Park South in Brooklyn, and many more.About the Society for the Preservation of Long Island AntiquitiesSPLIA is a not-for-profit organization dedicated to understanding, celebrating, and preserving Long Island's cultural heritage. Founded in 1948, SPLIA engages its mission through a variety of activities that include interpreting historic houses, creating exhibitions and educational programs, providing preservation advisory services, and publishing works that explore the history of architecture and design on Long Island.

A Preview for this title is currently not available.
More Books By Robert B. MacKay
View All