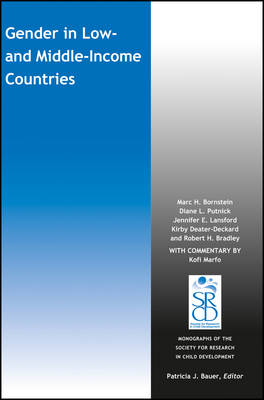 Gender in Low and Middle-Income Countries

How do girls and boys in low- and middle-income countries (LMIC) in the majority world vary with respect to central indicators of child growth and mortality, parental caregiving, discipline and violence, and child labor? How do key indicators of national gender equity and economic development relate to gender similarities and differences in each of these substantive areas of child development? This monograph of the SRCD is concerned with central topics of child gender, gendered parenting, gendered environments, and gendered behaviors and socializing practices in the underresearched and underserved world of LMIC. To examine protective and risk factors related to child gender in LMIC around the world, we used data from more than 2 million individuals in 400,000 families in 41 LMIC collected in the Multiple Indicator Cluster Survey, a household survey that includes nationally representative samples of participating countries. In the fi rst chapter of this monograph, we describe the conceptual "gender similarities" and "bioecological" frameworks that helped guide the monograph. In the second chapter, we detail the general methodology adhered to in the substantive chapters. Then, in topical chapters, we describe the situations of girls and boys with successive foci on child growth and mortality, parental caregiving, family discipline and violence, and child labor. We conclude with a general discussion of fi ndings from the substantive chapters in the context of gender and bioecological theories.

Across 41 LMIC and four substantive areas of child development, few major gender differences emerged. Our data support a gender similarities view and suggest that general emphases on early child gender differences may be overstated at least for the developing world of LMIC.

A Preview for this title is currently not available.
More Books By Marc H. Bornstein
View All