Theorizing gender is more urgent and highly political than ever before. These are times, in many countries, of increased visibility of women in public life and high-profile campaigns against sexual violence and harassment. Challenges to fixed, traditional gender norms have paved the way for the recognition of gay marriage and gender recognition acts allowing people to change the gender assigned to them at birth. Yet these are also times of religious and political backlash by the alt right, the demonization of the very term 'gender' and a renewed embrace of the 'naturalness' of gendered difference as ordained by God or Science.

A follow-up to the authors' 2002 text, Theorizing Gender, this timely and necessary intervention revisits gender theory for contemporary times. Refusing a singular 'truth about gender', the authors explore the multiple strands which go into making our gendered identities, in the context of materialist and intersectional perspectives interwoven with phenomenological and performative ones. The resulting critical overview will be a welcome and invaluable guide for students and scholars of gender across the social sciences and humanities.

Other Editions - Gender Theory in Troubled Times by Kathleen Lennon 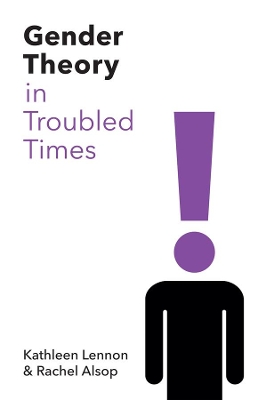 A Preview for this title is currently not available.
More Books By Kathleen Lennon
View All