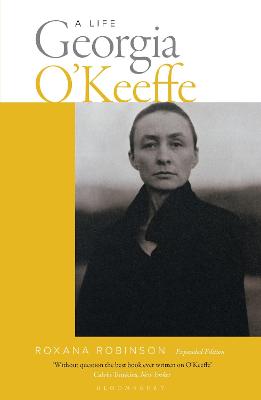 Born on a wheat farm in Wisconsin in 1887, the second of seven children, Georgia O'Keeffe had her eyes wide open to the beauty of nature from the very beginning, and by her twenties had become a formidable artist, and a strikingly original and spirited young woman. Moving first to Chicago and then to New York to pursue her studies, her consciousness was enlarged by her discovery of the modernist movement, and by the work both produced and shown by the photographer and art dealer Alfred Stieglitz.
Making her way in the world - first as a commercial artist and then as an art teacher - O'Keeffe developed her own original style. When Alfred Stieglitz discovered her work he was the first to exhibit it. Twenty-three years her senior, Stieglitz later fell in love with the artist as well as the work. O'Keeffe moved to New York in 1918 and married Stieglitz in 1924. She found herself a muse as well as an artist, and entered a circle of America's most vibrant and boundary-pushing artists - and became herself one of the most important and successful of them all.
But O'Keeffe fell in love again - this time with the bewitching landscapes of New Mexico,. She began spending half of each year there, and when Stieglitz died in 1949 she moved there for good, and lived there for the rest of her life, taking pleasure in the otherworldly beauty of the Ghost Ranch, north of Abiquiu.
Following O'Keeffe's early bud and sensational bloom, her loves, losses, agonies and ecstasies, and her painting against the dying of the light, Roxana Robinson's spellbinding and definitive biography has now been updated for the twenty-first century with a new foreword and access to never-before-seen letters. Written with the cooperation of the O'Keeffe family, and with access to sources closed to biographers during O'Keeffe's lifetime, It remains an unparalleled portrait of one of the most important female artists of all time.

A Preview for this title is currently not available.
More Books By Roxana Robinson
View All