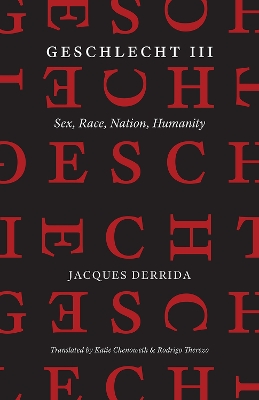 A significant event in Derrida scholarship, this book marks the first publication of his long-lost philosophical text known only as "Geschlecht III." The third, and arguably the most significant, piece in his four-part Geschlecht series, it fills a gap that has perplexed Derrida scholars. The series centers on Martin Heidegger and the enigmatic German word Geschlecht, which has several meanings pointing to race, sex, and lineage. Throughout the series, Derrida engages with Heidegger's controversial oeuvre to tease out topics of sexual difference, nationalism, race, and humanity. In Geschlecht III, he calls attention to Heidegger's problematic nationalism, his work's political and sexual themes, and his promise of salvation through the coming of the "One Geschlecht," a sentiment that Derrida found concerningly close to the racial ideology of the Nazi party.

Amid new revelations about Heidegger's anti-Semitism and the contemporary context of nationalist resurgence, this third piece of the Geschlecht series is timelier and more necessary than ever. Meticulously edited and expertly translated, this volume brings Derrida's mysterious and much awaited text to light.

A Preview for this title is currently not available.
More Books By Jacques Derrida
View All