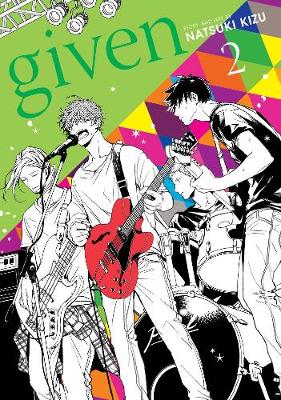 Description - Given, Vol. 2 by Natsuki Kizu

Sometimes a song can save your life.

Love of music unites the four members of the band Given: hotheaded guitarist Uenoyama, playboy drummer Akihiko, gentle bassist Haruki, and Mafuyu, a singer gifted with great talent and burdened by past tragedy. Their struggles and conflicts may drive them apart, but their bond to the music-and to one another-always brings them back together again.

As the band races toward their first live concert, Mafuyu struggles to write lyrics for their new song but can't find the words to express the emotions burning within him. Meanwhile, Uenoyama hears rumors about Mafuyu's past and is bewildered by his own feelings. The tension builds until the night of the show, when the band explodes into a raging, life-changing performance.