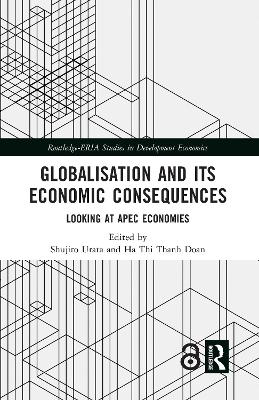 Globalisation and its Economic Consequences: Looking at APEC Economies

Description - Globalisation and its Economic Consequences: Looking at APEC Economies by Shujiro Urata

Given the rising criticisms of and growing doubts about globalisation, this timely edited volume looks at globalisation and its economic impact on eight countries in Asia and the Pacific region, namely Australia, China, Indonesia, Japan, Malaysia, Thailand, the United States (US), and Vietnam. The eight selected countries are members of the Asia-Pacific Economic Cooperation (APEC) forum and yet the economies of these member countries have benefited differently from globalisation.

This book summarises findings from existing academic literature in a coherent framework and reviews them critically to provide a balanced analysis. It also identifies the mechanisms through which globalisation impacts economies and explains how understanding of such mechanisms can be useful for formulating policies, which would benefit from globalisation while achieving inclusive economic growth in the context of rising nationalism and protectionism.

A Preview for this title is currently not available.
More Books By Shujiro Urata
View All