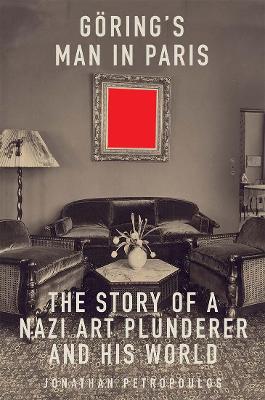 Goering's Man in Paris: The Story of a Nazi Art Plunderer and His World

Description - Goering's Man in Paris: The Story of a Nazi Art Plunderer and His World by Jonathan Petropoulos

Bruno Lohse (1911-2007) was one of the most notorious art plunderers in history. Appointed by Hermann Goering to Hitler's special art looting agency, he went on to supervise the systematic theft and distribution of over 22,000 artworks, largely from French Jews; helped Goering develop an enormous private art collection; and staged twenty private exhibitions of stolen art in Paris's Jeu de Paume museum during the war. By the 1950s Lohse was officially denazified but back in the art dealing world, offering looted masterpieces to American museums. After his death, dozens of paintings by Renoir, Monet, and Pissarro, among others, were found in his Zurich bank vault and adorning the walls of his Munich home.

Jonathan Petropoulos spent nearly a decade interviewing Lohse and continues to serve as an expert witness for Holocaust restitution cases. Here he tells the story of Lohse's life, offering a critical examination of the postwar art world.

Buy Goering's Man in Paris: The Story of a Nazi Art Plunderer and His World by Jonathan Petropoulos from Australia's Online Independent Bookstore, BooksDirect.

A Preview for this title is currently not available.
More Books By Jonathan Petropoulos
View All