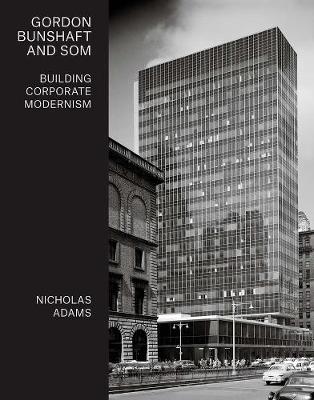 Gordon Bunshaft's (1909-1990) landmark 1952 design for Lever House reshaped the Manhattan skyline and elevated the reputation of Skidmore, Owings & Merrill (SOM), the firm where he would spend more than 40 years as a partner. Although this enigmatic architect left behind few records, his legacy endures in the corporate headquarters, museums, and libraries that were built in his distinctive modernist style. Bunshaft's career was marked by shifts in material. Glass and steel structures of the 1950s, such as New York's Chase Manhattan Bank, gave way to revolutionary designs in concrete, such as the Beinecke Rare Book and Manuscript Library at Yale University and the doughnut-shaped Hirshhorn Museum in Washington, DC. Bunshaft's collaborations with artists, including Isamu Noguchi, Jean Dubuffet, and Henry Moore, were of paramount importance throughout his career.

Nicholas Adams explores the contested line between Bunshaft's ambition for acclaim as a singular artistic genius and the collaborative structure of SOM's architectural partnership. Bunshaft received the Pritzker Architecture Prize in 1988 and remains the only SOM partner to have achieved this distinction. Adams counters Bunshaft's maxim that "the building speaks for itself" with necessary critical context about this modernist moment at a time when the future of Bunshaft's iconic works is very much in question.

A Preview for this title is currently not available.
More Books By Nicholas Adams
View All