Grand Opera Outside Paris: Opera on the Move in Nineteenth-Century Europe

Description - Grand Opera Outside Paris: Opera on the Move in Nineteenth-Century Europe by Jens Hesselager

Nineteenth-century French grand opera was a musical and cultural phenomenon with an important and widespread transnational presence in Europe. Primary attention in the major studies of the genre has so far been on the Parisian context for which the majority of the works were originally written. In contrast, this volume takes account of a larger geographical and historical context, bringing the Europe-wide impact of the genre into focus. The book presents case studies including analyses of grand opera in small-town Germany and Switzerland; grand operas adapted for Scandinavian capitals, a cockney audience in London, and a court audience in Weimar; and Portuguese and Russian grand operas after the French model. Its overarching aim is to reveal how grand operas were used - performed, transformed, enjoyed and criticised, emulated and parodied - and how they became part of musical, cultural and political life in various European settings. The picture that emerges is complex and diversified, yet it also testifies to the interrelated processes of cultural and political change as bourgeois audiences, at varying paces and with local variations, increased their influence, and as discourses on language, nation and nationalism influenced public debates in powerful ways.

Other Editions - Grand Opera Outside Paris: Opera on the Move in Nineteenth-Century Europe by Jens Hesselager 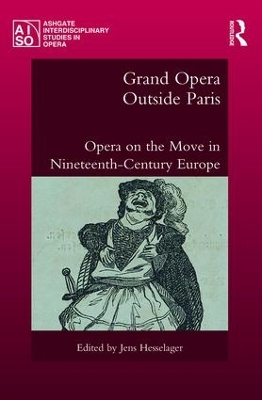 A Preview for this title is currently not available.
More Books By Jens Hesselager
View All