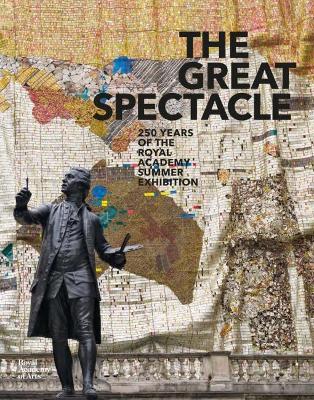 250 Years of the Summer Exhibition

The Royal Academy's Summer Exhibition is the world's longest running annual display of contemporary art, and one of its largest. Ever since 1769 the Academy's exhibition rooms have been crowded for some two months each year with thousands of paintings and sculptures by many of Britain's leading artists. These spectacular displays have provided artists with crucial competition, inspiration and publicity, and captured the interest of millions of visitors. The Great Spectacle takes the reader on a fascinating journey to tell the story of these exhibitions. Many treasured works of British art were first shown on the walls of the RA: portraits by Reynolds and Gainsborough, the mighty landscapes of Turner and Constable, and the Pre-Raphaelites, who caused such a critical and cultural furore. The chapter on the twentieth century will reveal the RA's relationship with British modernism, right up to the 2018 Summer Exhibition, which will be coordinated by Grayson Perry CBE RA. AUTHOR: Professor Mark Hallett is Director of Studies at the Paul Mellon Centre for Studies in British Art and author of Reynolds, Portraiture in Action (2014). Dr Sarah Victoria Turner is Assistant Director for Research at the Paul Mellon Centre for Studies in British Art. SELLING POINTS: A fascinating study of the longest-running annual exhibition of contemporary art, the Royal Academy of Arts Summer Exhibition, illustrated with works by many of the great names of British art including Joshua Reynolds, Thomas Gainsborough, J. M. W. Turner, John Constable, David Hockney, Grayson Perry and Tracey Emin Accompanies an exhibition at the Royal Academy of Arts from 12 June to 19 August 2018 200 colour images

A Preview for this title is currently not available.
More Books By Mark Hallett
View All