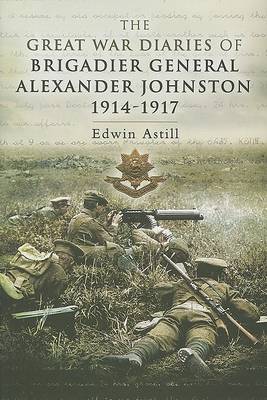 Alexander Johnston went over to France in August 1914 as a signals officer for 7 Infantry Brigade. He went on to serve in that capacity with 3rd Division before becoming, in turn, Brigade Major, Commanding Officer 10th Battalion Cheshire Regiment and finally Officer Commanding 126 Infantry Brigade. Throughout he proved himself to br a brave, resourceful and determined soldier. He was always close to the fornt line, yet his signals and stuff duties gave him insights into the conduct of the war at higher levels. Therin lies the value of this diary. Many of the major engagements of the war are covered. He took part in Mons, Le Cateau and the subsequent retreat and advance to Aisne. The diary provides valuable insight into the battle of La Bassee and the trench warfare of 1915. As a brigade Major he was kept busy in 1916 with both holding the line (in the face of intensive enemy mining operations) and the Somme battle. By 1917 his work in command of 10th Cheshire Regiment showed positive results in the battalion's performance at Messines and gained him promotion to Brigadier General. Within days of taking command he was up at the front line where he was badly wounded. But for the wound Johnston may well have gained even higher command and wider acclaim for his services. THE AUTHOR: Edwin Astill is an accomplished military historian who lies near Sheffield. 16 pages of b/w photographs. SELLING POINTS: A highly intelligent officer who gained rapid promotion, his diaries give a fascinating insight into conditions and the conduct of the war. Johnston was present at many of the major engagements of The Great War. 16 pages of b/w photographs