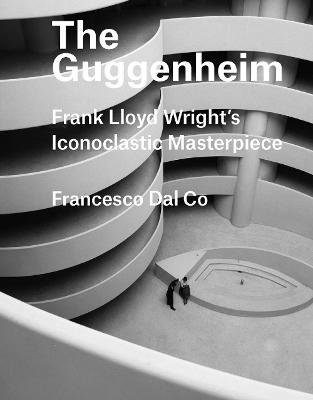 Considered the crowning achievement of Frank Lloyd Wright (1867-1959), the Solomon R. Guggenheim Museum in Manhattan is often called iconic. But it is in fact iconoclastic, standing in stark contrast to the surrounding metropolis and setting a new standard for the postwar art museum. Commissioned to design the building in 1943 by the museum's founding curator, Baroness Hilla von Rebay, Wright established residence in the Plaza Hotel in order to oversee the project. Over the next 17 years, Wright continuously clashed with his clients over the cost and the design, a conflict that extended to the city of New York and its cultural establishment.

Against all odds, Wright held fast to his radical design concept of an inverted ziggurat and spiraling ramp, built with a continuous beam-a shape recalling the form of an hourglass. Construction was only completed in 1959, six months after Wright's death. The building's initial critical response ultimately gave way to near-universal admiration, as it came to be seen as an architectural masterpiece. This essential text, offering a behind-the-scenes story of the Guggenheim along with a careful reading of its architecture, is beautifully illustrated with more than 150 images, including plans, drawings, and rare photographs of the building under construction.

A Preview for this title is currently not available.
More Books By Francesco Dal Co
View All