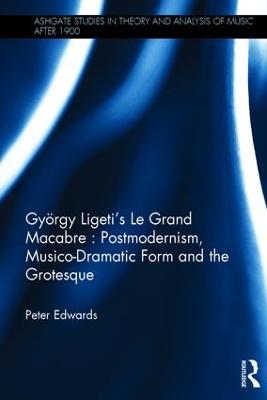 Gyoergy Ligeti's Le Grand Macabre (1974-77, revised 1996) has consolidated its position as one of the major operatic works of the twentieth century. Few operas composed since the 1970s have received such numerous productions, bringing the eclectic score to a global audience. Famously dubbed by Ligeti as an 'anti-anti-opera', the piece is a highly ambiguous, apocalyptic fable about the human condition, fear of death and the final judgement. As the first book in English solely dedicated to discussion of this work, Gyoergy Ligeti's Le Grand Macabre: Postmodernism, Musico-Dramatic Form and the Grotesque offers new perspectives on the opera's musico-dramatic identity in the context of musical postmodernism. Peter Edwards draws on a range of modernist and postmodernist theories to explore the collision of past styles and genre models in the opera, its expressive states and its engagement with the grotesque. This is ably supported by musical analysis and extensive study of Ligeti's sketch materials held at the Paul Sacher Foundation in Basel. Edwards's analyses culminate in a new approach to examining the opera's rich multiplicities, the composition of the musical material and the nature of Ligeti's relationship with the musical past. This is a key reference work in the fields of musical modernism and postmodernism, opera studies and the music of Ligeti.

A Preview for this title is currently not available.
More Books By Peter Edwards
View All