The latest installment from always funny, sometimes bizarre comic David Sedaris. Praise for Theft By FindingThe writing here is funnier, (even) sharper . . . There isn't a dull word among these pages (India Knight Sunday Times)Could there be a more delightful American import than the memoirist David Sedaris? Not since the peanut butter and jelly sandwich have we inherited something so sweet and comforting yet so wickedly naughty (The Times)This first of two volumes of his copious diaries takes us from 1977 to 2002, and sees him grow from a despondent21-year-old in menial jobs into the man recognised as possibly the best humorist of the 2000s(Daily Telegraph, Best Books Under the Sun, Summer 2017)So often Sedaris's phrasing is beautiful in its piquancy and minimalism...His life is extraordinary in so many ways - the drug addiction, the eccentric family, the crazy jobs, the fame, the globetrotting - but one of the more unlikely achievements here is in making it all seem quite ordinary. Ultimately, his masterstroke is in acting as a bystander in his own story (Book of the Day, Guardian)He is the American Alan Bennett - or would be, if Bennett had a history of serious substance abuse and a higher tolerance for sick humour (Times Literary Supplement)He makes me laugh so much. In an era when US satire is outpacing our own he's a sharp, humane and hilarious voice that never fails to make you smile - and sometimes weep. Apparently effortless humour is difficult, and precious. He's the real thing (James Naughtie Radio Times)A deadpan, darkly comical portrait of the American underbelly . . . Sedaris shares something of [Alan] Bennett's detached curiosity, and they both have a thirst for amusement (Craig Brown Mail on Sunday)It's like gossiping with an old friend - if that friend were a rather sexy American Alan Bennett with lots of good drug stories (Melissa Katsoulis The Times)Cool, very funnv, sardonic, yet open . . . there is an echo of Truman Capote or Tennessee Williams - with extra quirk. Or even Lewis Carroll . . . one of the biggest comedy writers of his generation (Peter Bradshaw Spectator)Just as in his essays and stories, the young Sedaris is both scandalising and scandalised, surprisingly profound, and very, very funny . . . Sedaris fans will not be surprised to know that he can do darkness and profundity as well as humour. Theft by Finding is full of all three, but what makes it so good is Sedaris's gift for sidling up them all from the least expected angle (Daily Telegraph)

Other Editions - Happy-Go-Lucky by David Sedaris 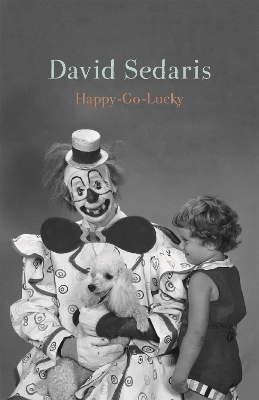 A Preview for this title is currently not available.
More Books By David Sedaris
View All