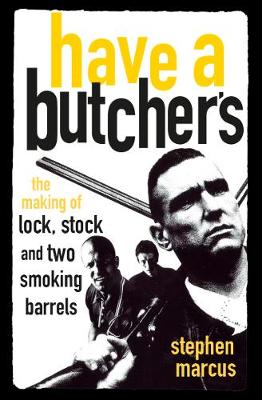 The Making of Lock, Stock and Two Smoking Barrels

Description - Have a Butcher's by Stephen Marcus

Published to coincide with the 20th anniversary of one of the most seminal British films ever made. When Lock, Stock and Two Smoking Barrels was released in 1998, few would have prophesized quite the impact this low budget crime comedy would have. Almost overnight it became a cultural phenomenon, launched the careers of Guy Ritchie, Matthew Vaughn and Jason Statham, amongst others, and spawned a television series and numerous British gangster film rip-offs in the process. However, box office gold didn't come without huge upheaval, and the making of the film was often fraught. In Have a Butcher's, actor Stephen Marcus (Nick the Greek in the film) recounts the on-set dramas, the behind the scenes banter (including tales of Vinnie Jones' first day of filming), his initial meeting with Guy Ritchie, the subsequent trips to Hollywood as the boys basked in success and critical acclaim, and the numerous financial problems that were only solved when Sting and his wife, Trudie Styler, came on board. In interviewing many of his co-stars, he remembers the making of a film that has become a firm cult favourite. AUTHOR: Stephen Marcus is a British actor who has appeared in films such as Quills, Stage Beauty, Iris, Angela's Ashes and Kinky Boots, and television such as Doctor Who, Red Dwarf and Midsomer Murders. 20 colour illustrations

Buy Have a Butcher's by Stephen Marcus from Australia's Online Independent Bookstore, BooksDirect.

A Preview for this title is currently not available.
More Books By Stephen Marcus
View All