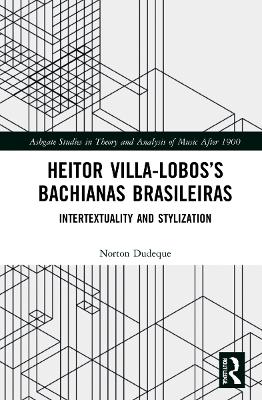 Heitor Villa-Lobos's Bachianas Brasileiras demonstrates how the composer achieved his own Brazilian neoclassical style in a group of works, nine suites in total, that is arguably one of the best examples of homage to J.S. Bach's music in the twentieth century.

In this book, the corpus of Bachianas Brasileiras is contextualised and critically examined according to its structure and intertextual aspects, as well as its relationship to Bach's music, Brazilian popular music, and other works by contemporaries of Villa Lobos.

A range of musical examples illustrate instances of the selected topics in the works, encompassing urban Brazilian popular music such as the choro, Brazilian northeast and afro rhythms, and citation of folkloric melodies.

Dudeque's comprehensive examination of the Bachianas Brasileiras will be invaluable for scholars and researchers of music theory and analysis.

A Preview for this title is currently not available.
More Books By Norton Dudeque
View All