Hellenomania, the second volume in the MANIA series, presents a wide-ranging, multi-disciplinary exploration of the modern reception of ancient Greek material culture in cultural practices ranging from literature to architecture, stage and costume design, painting, sculpture, cinema, and the performing arts. It examines both canonical and less familiar responses to both real and imagined Greek antiquities from the seventeenth century to the present, across various national contexts. Encompassing examples from Inigo Jones to the contemporary art exhibition documenta 14, and from Thessaloniki and Delphi to Nashville, the contributions examine attempted reconstructions of an 'authentic' ancient Greece alongside imaginative and utopian efforts to revive the Greek spirit using modern technologies, new media, and experimental practices of the body. Also explored are the political resonances of Hellenomaniac fascinations, and tensions within them between the ideal and the real, the past, present, and future.

Part I examines the sources and derivations of Hellenomania from the Baroque and pre-Romantic periods to the early twentieth century. While covering more canonical material than the following sections, it also casts spotlights on less familiar figures and sets the scene for the illustrations of successive waves of Hellenomania explored in subsequent chapters. Part II focuses on responses, uses, and appropriations of ancient Greek material culture in the built environment-mostly architecture-but also extends to painting and even gymnastics; it examines in particular how a certain idealisation of ancient Greek architecture affected its modern applications. Part III explores challenges to the idealisation of ancient Greece, through the transformative power of colour, movement, and of reliving the past in the present human body, especially female. Part IV looks at how the fascination with the material culture of ancient Greece can move beyond the obsession with Greece and Greekness.

Other Editions - Hellenomania by Katherine Harloe 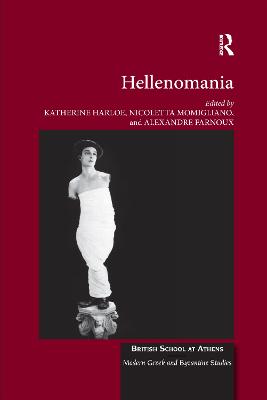 A Preview for this title is currently not available.
More Books By Katherine Harloe
View All