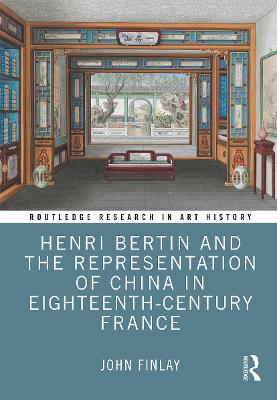 Henri Bertin and the Representation of China in Eighteenth-Century France

This is an in-depth study of the intellectual, technical, and artistic encounters between Europe and China in the late eighteenth century, focusing on the purposeful acquisition of information and images that characterized a direct engagement with the idea of "China."

The central figure in this story is Henri-Leonard Bertin (1720-1792), who served as a minister of state under Louis XV and, briefly, Louis XVI. Both his official position and personal passion for all things Chinese placed him at the center of intersecting networks of like-minded individuals who shared his ideal vision of China as a nation from which France had much to learn. John Finlay examines a fascinating episode in the rich history of cross-cultural exchange between China and Europe in the early modern period, and this book will be an important and timely contribution to a very current discussion about Sino-French cultural relations.

This book will be of interest to scholars in art history, visual culture, European and Chinese history.

Buy Henri Bertin and the Representation of China in Eighteenth-Century France by John Finlay from Australia's Online Independent Bookstore, BooksDirect. A Preview for this title is currently not available.
More Books By John Finlay
View All

A Treatise on the Law of Renewals: In Respect to Leases for Lives Renewable for Ever in Ireland, with the Cases and Decisions Thereon: Including an Extensive Report ...
John Finlay
Paperback , Dec '10
RRP: $75.85 $68.27