Henry VIII and the men who made him: The secret history behind the Tudor throne

Description - Henry VIII and the men who made him: The secret history behind the Tudor throne by Tracy Borman

'An outstanding work of historical artistry, a brilliantly woven and pacy story of the men who surrounded, influenced and sometimes plagued Henry VIII.' Alison WeirHenry VIII is well known for his tumultuous relationships with women, and he is often defined by his many marriages. But what do we see if we take a different look? When we see Henry through the men in his life, a new perspective on this famous king emerges.Henry's relationships with the men who surrounded him reveal much about his beliefs, behaviour and character. They show him to be capable of fierce, but seldom abiding loyalty; of raising men only to destroy them later. He loved to be attended and entertained by boisterous young men who shared his passion for sport, but at other times he was more diverted by men of intellect, culture and wit. Often trusting and easily led by his male attendants and advisers during the early years of his reign, he matured into a profoundly suspicious and paranoid king whose favour could be suddenly withdrawn, as many of his later servants found to their cost. His cruelty and ruthlessness would become ever more apparent as his reign progressed, but the tenderness that he displayed towards those he trusted proves that he was never the one-dimensional monster that he is often portrayed as. In this fascinating and often surprising new biography, Tracy Borman reveals Henry's personality in all its multi-faceted, contradictory glory.

Buy Henry VIII and the men who made him: The secret history behind the Tudor throne by Tracy Borman from Australia's Online Independent Bookstore, BooksDirect.

Other Editions - Henry VIII and the men who made him: The secret history behind the Tudor throne by Tracy Borman 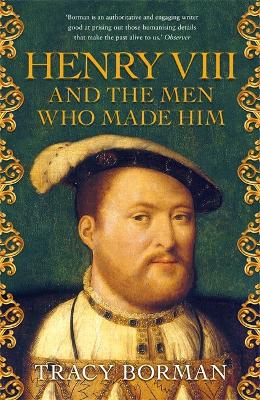 A Preview for this title is currently not available.
More Books By Tracy Borman
View All