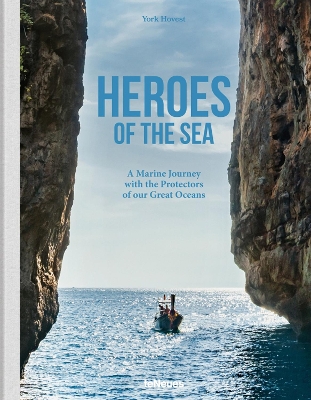 Heroes of the Sea

Description - Heroes of the Sea by York Hovest

Humankind has always been fascinated by the magic of the ocean, its power and unpredictability. The open sea awakens a desire to set forth and sail, but also the urge to step back in awe and fear. Today, however, our oceans are more threatened than ever before. Worldwide plastic waste pollution and industrial fishing threaten the existence of countless ocean species. Global warming and the resulting climate change are leading to ever greater damage of the marine ecosystem. York Hovest, a photographer, adventurer and author, has set himself the task of countering this development. The regular National Geographic contributor has joined "heroes of the seas" - scientists, activists, and visionaries - around the globe to explore and document the most inventive solutions and promising projects to save our oceans. In parallel to a rich documentary film, this book charts Hovest's journey to help save the seas, capturing the beauty of the ocean as well as its extreme fragility. Hovest's pictures span the azure blue seas of the South Seas to the cold waters around the Arctic Circle. They show whales, sharks, and colourful reef inhabitants in their natural habitat. In breathtaking splendour and scope, they remind us of the immense diversity and beauty of marine life and urge us to protect the abundant life forms for whom the ocean is home. AUTHOR: York Hovest, born in 1978 in Wesel, North Rhine- Westphalia, Germany, is an investigative photographer, author, and adventurer who travels the world in search of inspiring stories and destinies. In his new project "Heroes of the Sea," he accompanies people who have dedicated themselves to saving the oceans. He is a sought-after guest in the media, a keynote speaker, and formerly an internationally successful fashion photographer. SELLING POINTS: Foreword by the Dalai Lama A parallel documentary film will accompany this publication There will be significant media interest and a global media campaign upon the book's launch Hovest's partners include Olympus, Sony, Leica and National Geographic To bring attention to this project, Hovest will cross the Atlantic Ocean in a purpose-built rowboat, which will garner worldwide media attention Hovest is a sought-after keynote speaker 150 colour images