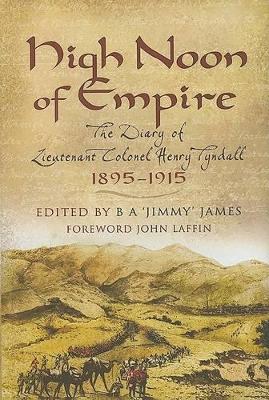 The Diary of Lieutenant Colonel Henry Tyndall 1895 to 1915

Description - High Noon of Empire by B. A. James

Henry Tyndall was a typical product of the Victorian age - an intensely patriotic army officer who served in India, on the North-West Frontier, on the Western Front and in East Africa at the height of the British Empire. For 20 years, form 1895 to 1915, he kept a detailed diary that gives a vivd insight into his daily life and concerns, his fellow officers and men, and the British army of his day. He also left a graphic account of his experiences on campaign in the First World War and in the Third Afghan War. B.A. 'Jimmy' James has edited and annotated Tyndall's diary in order to make itfully accessible to modern reader. As he notes in his introduction, 'this marching soldier of the queen was a gallant officer who conscientiously served his sovereign wherever duty called...his diary deserves attention as it reflects the manners, cuastoms and attitudes of this vanished age'. THE AUTHOR: Lieutenant Colonel Henry Tyndall was first commissioned in 1895 and he served for much of his military career in India. He took part in the Malakand campaign in 1897, fought on the Western Front during WWI, and in the Third Afghan War in 1919. He won a DSO and the Croix de Guerre. THE EDITOR: B.A. 'Jimmy" James was born in India, Jimmy joined the RAF before the war and was shot dowmn as a bomber pilot in 1940, spending five years as a POW. After the war he was awarded the Military Cross and a mention in despatches for his escaping activities. 15 illustrations

Buy High Noon of Empire by B. A. James from Australia's Online Independent Bookstore, BooksDirect.

A Preview for this title is currently not available.
More Books By B. A. James
View All