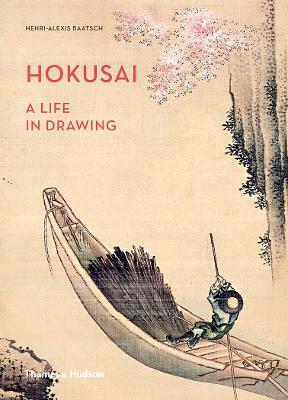 A Life in Drawing

Katsushika Hokusai (1760-1849) was the most prolific and diverse artist of Japan's Edo period, with a body of work reputed to include more than 30,000 drawings, paintings and prints. This book traces the career of this child from a working-class district of old Tokyo, then known as Edo, evoking the special atmosphere of this great city and of Japanese life, when Japan - closed to foreigners - developed in a vacuum a powerfully original culture. Its urban centres enjoyed increasing wealth and stability, leading to a flourishing culture of art and pleasure-seeking. Woodblock prints of the genre known as ukiyo-e - 'images of the floating world' - became defining images of the age.

Hokusai became one of the great masters of the woodcut, this 'brush gone wild', as he called himself, being rediscovered by the Impressionists and aesthetes at the end of the nineteenth century. His works range from portraits of popular actors and courtesans to landscapes and seascapes, including his celebrated 'Thirty-Six Views of Mount Fuji', and from cleverly observed scenes of everyday life to the erotic prints known as shunga. While his prints had a huge influence on the course of Western art, it is equally true that he himself was influenced by European painting, embracing techniques such as perspective and adapting them to suit Japanese tastes. He remains one of the greatest and - thanks to his personality - one of the most attractive figures of world art.