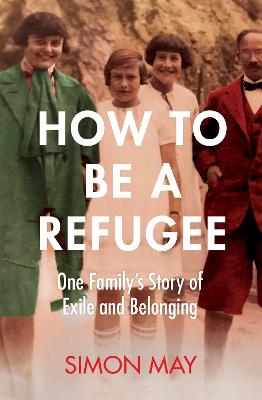 How to Be a Refugee: One Family's Story of Exile and Belonging

Description - How to Be a Refugee: One Family's Story of Exile and Belonging by Simon May

The most familiar fate of Jews living in Hitler's Germany is either emigration or deportation to concentration camps. But there was another, much rarer, side to Jewish life at that time: denial of your origin to the point where you manage to erase almost all consciousness of it. You refuse to believe that you are Jewish.

How to Be a Refugee is Simon May's gripping account of how three sisters - his mother and his two aunts - grappled with what they felt to be a lethal heritage. Their very different trajectories included conversion to Catholicism, marriage into the German aristocracy, securing 'Aryan' status with high-ranking help from inside Hitler's regime, and engagement to a card-carrying Nazi.

Even after his mother fled to London from Nazi Germany and Hitler had been defeated, her instinct for self-concealment didn't abate. Following the early death of his father, also a German Jewish refugee, May was raised a Catholic and forbidden to identify as Jewish or German or British.

In the face of these banned inheritances, May embarks on a quest to uncover the lives of the three sisters as well as the secrets of a grandfather he never knew. His haunting story forcefully illuminates questions of belonging and home - questions that continue to press in on us today.

Buy How to Be a Refugee: One Family's Story of Exile and Belonging by Simon May from Australia's Online Independent Bookstore, BooksDirect.

Other Editions - How to Be a Refugee: One Family's Story of Exile and Belonging by Simon May A Preview for this title is currently not available.
More Books By Simon May
View All