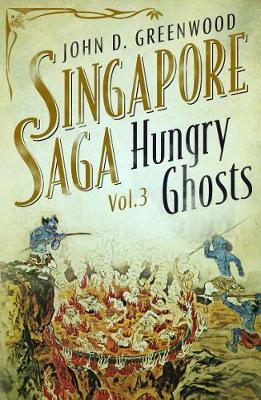 Set against the development of Singapore in the years 1852-1869, Hungry Ghosts (Singapore Saga, Vol 3) continues the vivid portrayal of the lives of the early pioneers, including Tan Kim Ching, W. H. Read, Habib Noh, Tan Kim Seng, Mother St Mathilde, Syed Ahmed Alsagoff and Whampoa as well as an array of fictional characters who bring nineteenth-century Singapore to life. A female refugee from the Taiping Rebellion is kidnapped in Amoy and sold as a concubine in Singapore; an enterprising Indian convict converts his training as a metalworker into the more lucrative business of counterfeiting; a terror-filled secret society soldier is led down to the ten courts of hell on the night of the hungry ghosts; Duncan Simpson meets with the Heavenly King in Nanking and is tortured in a Chinese prison; an English wife escapes a loveless marriage when the 'ghost ship' CSS Alabama puts into Singapore. As the fates and fortunes of its protagonists play themselves out against the backdrop of the Indian Mutiny, the Second Opium War and the last years of the Taiping rebellion, Singapore becomes a Crown colony and celebrates the fiftieth anniversary of its founding. Hungry Ghosts is volume three in the Singapore Saga, a series of historical fiction covering the early years of Singapore, and follows Forbidden Hill and Chasing the Dragon.

A Preview for this title is currently not available.
More Books By John D. Greenwood
View All