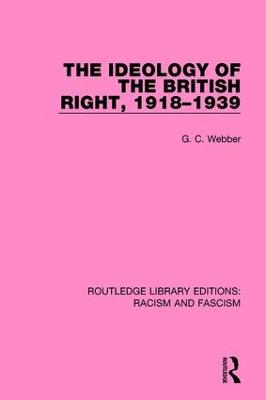 This book, first published in 1986, examines the activities and beliefs of right-wing Conservatives and overt Fascists in inter-war Britain. It analyses the role that ideology played in the various struggles between leaders and dissidents within the Conservative Party, traces the development of central themes in right-wing thought and seeks to show how the complexity of these beliefs established ideological barriers to the growth of Fascism in Britain which, it is argued, was heavily reliant upon the support of disillusioned Conservatives for its limited success. In this way the book contributes to our understanding of both the Conservative Party and the British Fascist movement between the wars, and in doing so helps to establish an overview of right-wing politics in Britain since the turn of the century. It also contains an appendix of information on lesser-known individuals and organisations on the Right.

Buy The Ideology of the British Right, 1918-1939 by G.C. Webber from Australia's Online Independent Bookstore, BooksDirect.

A Preview for this title is currently not available.
More Books By G.C. Webber
View All