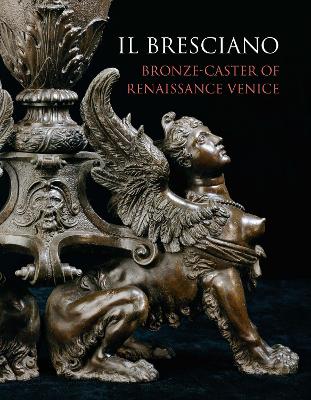 'This monograph is a testament to the work of Charles Avery, who has put Il Bresciano on the map as a leading Italian Renaissance sculptor... Avery has established an impressively substantial oeuvre for Bresciano.' David Ekserdjian, The Art Newspaper

A nucleus of sculptures cast by Andrea di Alessandri, commonly called from his native city, 'Il Bresciano', or from his products, 'Andrea dai bronzi', has been identified over the centuries. His style has been described as having similarities both with the High Renaissance of Sansovino and the Mannerism of Vittoria, the two successive master sculptors of sixteenth-century Venice, though he cast major bronzes for both. Andrea's signed masterpiece is a Paschal Candlestick in bronze, over two metres high and with sixty or more fascinating figures, made for Sansovino's magnificent lost church of Santo Spirito in 1568 and now in Santa Maria della Salute.

The author's identification in 1996 of a pair of magnificent Firedogs with sphinx feet (which in 1568 had been recommended to Prince Francesco de'Medici in Florence), and in 2015 of an elaborate figurative bronze Ewer in Verona, have been the culmination of the process of recognition. Archival research has at last revealed the span of Andrea's life as 1524/25-1573, as well as many significant facts about his family and patronage. So the time is ripe for a comprehensive, well-illustrated, book on Il Bresciano, a 'new' and major bronzista in the great tradition of north Italy.

A Preview for this title is currently not available.
More Books By Charles Avery
View All