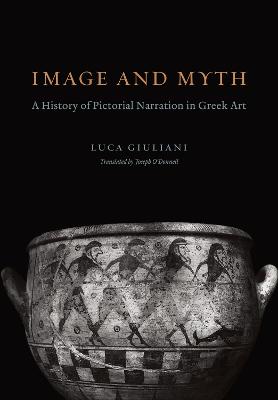 A History of Pictorial Narration in Greek Art

On museum visits, we pass by beautiful, well-preserved vases from ancient Greece-but how often do we understand what the images on them depict? In Image and Myth, Luca Giuliani tells the stories behind the pictures, exploring how artists of antiquity had to determine which motifs or historical and mythic events to use to tell an underlying story while also keeping in mind the tastes and expectations of paying clients. Covering the range of Greek style and its growth between the early Archaic and Hellenistic periods, Giuliani describes the intellectual, social, and artistic contexts in which the images were created. He reveals that developments in Greek vase painting were driven as much by the times as they were by tradition-the better-known the story, the less leeway the artists had in interpreting it. As literary culture transformed from an oral tradition, in which stories were always in flux, to the stability of written texts, the images produced by artists eventually became nothing more than illustrations of canonical works. At once a work of cultural and art history, Image and Myth builds a new way of understanding the visual culture of ancient Greece.