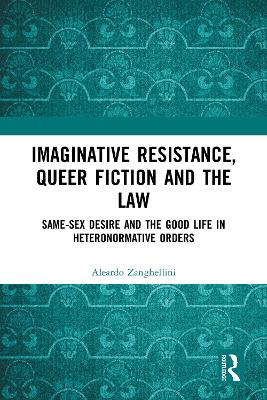 Imaginative Resistance, Queer Fiction and the Law: Same-Sex Desire and the Good Life in Heteronormative Orders

Description - Imaginative Resistance, Queer Fiction and the Law: Same-Sex Desire and the Good Life in Heteronormative Orders by Aleardo Zanghellini

Imaginative Resistance, Queer Fiction and the Law develops a novel account of how heteronormative sociolegal orders undermine the well-being of same-sex attracted people, even when these normative orders may fall short of coercively interfering with their choices. Queer well-being is generally studied from psychological perspectives, through the concept of 'minority stress.'

Taking four texts of mid-century Anglo-American queer fiction as illustrative case studies, this book argues - in a philosophical rather than a psychological register - that heteronormativity also affects queer well-being in more intangible ways. The central claim is that heteronormativity shackles the imagination: it curtails no less the imaginative reach of authors of queer fiction, than our ability - engaged as we are in projects of self-authorship - to make-believe personal futures in which same-sex intimacy is brought to bear on our well-being. The book's central claim re-works a concept central to the philosophy of fiction - 'imaginative resistance' - and puts it into service of questions raised in moral philosophy. Apart from its political and normative implications - strengthening the case for at least some global gay rights - and from challenging some of queer theory's orthodoxies, the book also makes contributions to queer literary history, criticism and biography. Drawing on archival material and personal interviews, fresh readings are offered of Charles Jackson's The Fall of Valor (1946), Gillian Freeman's The Leather Boys (1961), and Patricia Highsmith's The Price of Salt (1952) and The Talented Mr Ripley (1955), making a case for their inclusion in the queer literary canon.

Imaginative Resistance, Queer Fiction and the Law will appeal to students of literary criticism, queer sociolegal history, law & literature, the philosophy of fiction, and queer theory, politics and ethics.

A Preview for this title is currently not available.
More Books By Aleardo Zanghellini
View All