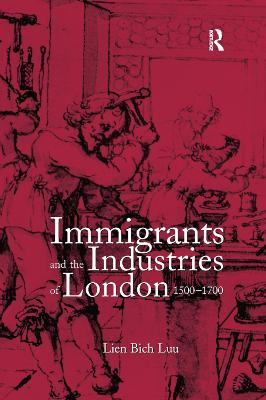 Description - Immigrants and the Industries of London, 1500-1700 by Lien Bich Luu

Immigration is not only a modern-day debate. Major change in Europe in the sixteenth and seventeenth centuries led to a surge of political and religious refugees moving across the continent. Estimates suggest that from 1550 to 1585 around 50,000 Dutch and Walloons from the southern Netherlands settled in England, and in the late seventeenth century 50,000 Huguenots from France followed suit. The majority gravitated towards London which, already a magnet for merchants and artisans across the centuries, began a process of major transformation. New skills, capital, technical know-how and social networks came with these migrants and helped to spark London's cosmopolitan flair and diversity. But the early experience of many of these immigrants in London was one of hostility, serving to slow down the adoption and expansion of new crafts and technologies. Immigrants and the Industries of London, 1500-1700 examines the origins and the changing face and shape of many trades, crafts and skills in the capital in this transformative period. It focuses on three crafts in particular: silk weaving, beer brewing and the silver trade, crafts which had relied heavily on foreign skills in the 16th century and had become major industries in the capital by the 18th century. Each craft was established by a different group of immigrants, distinguished not only by their social backgrounds, social organisation, identity, motives, migration pattern and experience and links with their home country but also by the nature of their reception, assimilation and economic contribution. Change was a protracted process in the London of the day. Immigrants endured inferior status, discrimination and sometimes exclusion, and this affected both their ability to integrate and their willingness to share trade secrets. And resistance by the English population meant that the adoption of new skills often took a long time - in some cases more than three centuries - to complete. The book places the adoption of new crafts and technologies in London within a broader European context, and relates it to the phenomenal growth of the metropolis and technological developments within these specific trades. It throws new perspectives on the movement of skills from Europe and the transmission of know-how from the immigrant population to English artisans. The book explores how, through enterprise and persistence, the immigrants' contribution helped transform London from a peripheral and backward European city to become the workshop of the world by the nineteenth century. By way of conclusion the book brings the current immigration debate full circle to examine the lessons we can draw from this early-modern experience.

Other Editions - Immigrants and the Industries of London, 1500-1700 by Lien Bich Luu 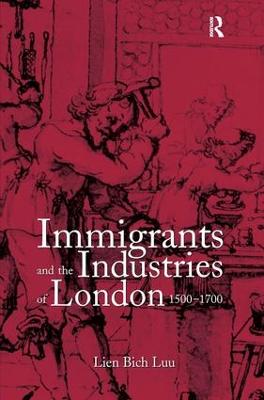 A Preview for this title is currently not available.
More Books By Lien Bich Luu
View All