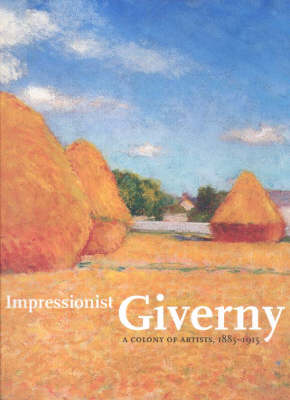 Lured by the ineffable beauty represented in Claude Monet's artwork and the promise of painting en plein air, artists from America and across Europe flocked to the French village of Giverny in the late nineteenth and early twentieth centuries, transforming it from a sleepy hamlet to a colorful and thriving artists' community. Impressionist Giverny: A Colony of Artists, 1885-1915 evokes the longevity of impressionism and highlights the role Giverny played in the movement's ascendance, placing Giverny in the context of other European artists' colonies of its era.

Making use of reproductions of period postcards, paintings, photographs, and previously unpublished documents, editor Katherine M. Bourguignon traces the evolution of the impressionist style in this idyllic and international setting. Fellow contributors address the interactions of the artists of Giverny with Monet, the utopian experiment of a collective artistic enterprise, the emergence of the rural innkeeper as a new class of patron, and the American impressionists who, inspired by their experience in France, often formed artists' colonies back in the United States and participated in the ongoing tradition of French-American cultural exchange.

Accompanying exhibitions at the Musee d'Art Americain Giverny and at the San Diego Museum of Art, Impressionist Giverny: A Colony of Artists, 1885-1915 captures the creative spirit and aesthetic that enlivened this artistic haven a century ago.

A Preview for this title is currently not available.
More Books By Katherine M. Bourguignon
View All