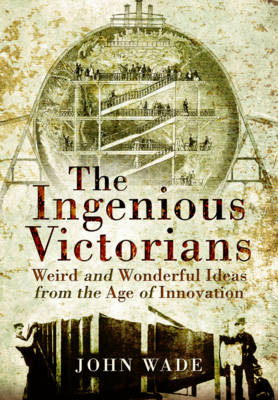 Weird and Wonderful Ideas from the Age of Innovation

We all know that some of the greatest inventions came from the Victorian age, the successors of which are still with us today. But this book is not entirely about those. It's more about some of the weird and wonderful inventions, ideas and projects some successful, others less so that have largely been forgotten. Where well-known inventions or design concepts are included, it is from a perspective not previously appreciated, with details of the ingenious technology and thinking that led to their introduction and success. Here you can read how Victorian innovators were responsible for: the world's largest glass structure; an electric railway with lines under the sea and a carriage on stilts 20 feet above the waves; a monster globe that visitors could enter to see the world's land masses, seas, mountains and valleys modelled on the interior; cameras disguised as bowler hats and many other everyday objects; the London Underground as a steam railway; safety coffins designed to prevent premature burial; unusual medical uses for electricity; the first traffic lights, which exploded a month after their erection in Westminster; and the birth and rapid rise to popularity of the cinema ... as well as many other ingenious inventions. AUTHOR: John Wade began his journalistic career on local newspapers, where he worked his way from junior reporter to deputy editor. He was editor of the UK magazine Photography for seven years before becoming a freelance writer and photographer thirty years ago. He has written and illustrated numerous articles on camera history for photographic and collectors' magazines in the UK, America and Australia. He has also written articles on social history for magazines in the UK, and is the author of more than thirty books, published in the UK and US. SELLING POINTS: . Sir Edward Watkin, Member of Parliament and railway entrepreneur, who attempted to build the first tunnel between England and France, as well as a British rival to the Eiffel Tower. . Marc Brunel (father of the better-known Isambard Kingdom Brunel) and the amazing story of the Thames Tunnel, the first to be built under a navigable river, and now a tunnel on the Overground network. . An American photographer who built the world's largest camera to shoot the biggest picture in the world. . The building of Big Ben (actually the tower in which the Big Ben bell stands) and Tower Bridge. . The Great Stink and how it was averted (the building of London's sewer system). . How and why Britain's clocks were synchronised to indicate a common time. 200 illustrations

A Preview for this title is currently not available.
More Books By John Wade
View All

England's Greatness: Its Rise and Progress in Government, Laws, Religion, and Social Life; Agriculture, Commerce, and Manufactures; Science, Literature, and the Arts. from the Earliest Period to the Peace of Paris
John Wade
Paperback , Oct '18
RRP: $101.88 $91.69

Appendix to the Black Book: An Exposition of the Principles and Practices of the Reform Ministry and Parliament, the Church and the Dissenters, Catastrophe of the House of Lords, and Prospects of Tory Misrule ... / By the Original Editor.
John Wade
Paperback , Dec '10
RRP: $47.20 $42.48