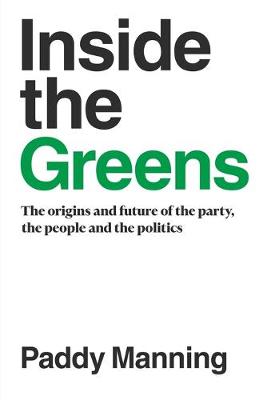 Inside the Greens: The True Story of the Party, the Politics and the People

Description - Inside the Greens: The True Story of the Party, the Politics and the People by Paddy Manning

A compulsively readable, critically important account of the history and future of the Australian Greens.

The re-election of a Coalition government, after a lost decade of policy backflips and leadership volatility, has redrawn the political landscape. With a record quarter of voters abandoning the major parties at the last election, what lies ahead for the Greens, the 'third force' in Australian politics? In a nation divided over global warming, rising inequality and national security, can they agitate for forward-thinking policy, or will a refusal to compromise prove a stumbling block?

Inside the Greens investigates the personalities, policies and turning points that have formed the party- from the fight to save Lake Pedder to the Stop Adani convoy; from heckling George W. Bush to the fateful decision to vote down the carbon tax; from party of protest to the balance of power in minority governments at state and federal level. It also exposes the Greens as they are today- a divided organisation reckoning with structural and strategic challenges. Beset by factional showdowns and suggestions of internal sabotage, can the party hang together? Has it strayed too far from grassroots activism? Can the Greens do politics differently and still succeed?

Journalist Paddy Manning draws on previously unrevealed archival material and interviews with party friends, foes and key figures - including Bob Brown, Christine Milne, Lee Rhiannon, Adam Bandt and Richard Di Natale - to weave a compulsively readable account of where the Greens are heading, and what that means for Australia.

Buy Inside the Greens: The True Story of the Party, the Politics and the People by Paddy Manning from Australia's Online Independent Bookstore, BooksDirect.