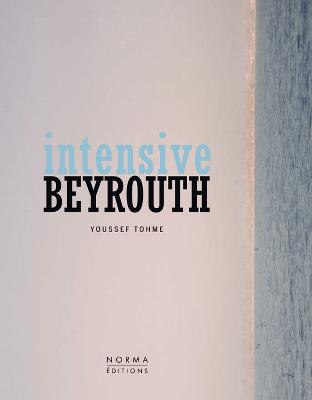 "Building in Lebanon is my way of taking a position with regard to the war." This statement by the French-Lebanese architect Youssef Tohme is key to getting into and grasping Intensive Beirut. This illustrated essay blends reflections on the urban development of the Lebanese capital with the experience gained on the projects of this architect-contractor, engaged in the effort to reopen the debate on architecture in his country. In a place where every situation is never more than a temporary state, the analysis of space is fundamental. The first part of the book examines Youssef Tohme's ideas, illustrated with 25 photos by Ziad Antar, a Lebanese visual artist-photographer. Equipped with a Holga and a Rollefleix, Antar has captured the architect's key projects - St. Joseph University in Beirut (designed with the office of 109 architects), the Villa T and the Villa M in Kornet Chehouane, and the Villa SC in Akoura. The second part, authored by Karine Dana, facilitated exchanges of ideas between Youssef Tohme and important figures of the Lebanese cultural scene such as the architect Tony Chakar, the artist Ziad Abilama and the singer Ahmed de Maschrou. Text in English and French. AUTHOR: Youssef Tohme, architect, joined the firm of Jean Nouvel in 2001, where in 2006 he oversaw the Louvre-Abu Dhabi project. He went on to found his own office in Beirut and build St. Joseph University and his first villas, presented in this book. Karine Dana, an architect by training, today works as an architecture critic and independent journalist. She designed the scenario and the content for the Agora Bordeaux 2014 Biennale and directed the film, Architectural Dreams, on the architecture of Youssef Tohme. The Lebanese artist Ziad Antar has participated in many international exhibitions since 2008 - at the Tate Modern, the Beirut Art Center and elsewhere. In 2010, he was awarded the Future Generation Art Prize. 25 colour, 19 b/w

A Preview for this title is currently not available.
More Books By Karine Dana
View All