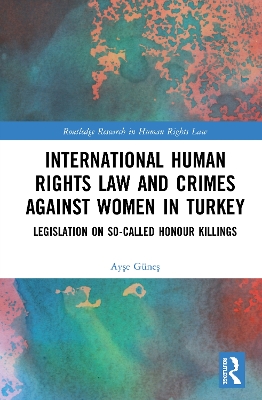 This book evaluates the effectiveness of current international human rights law, and in particular the recent Istanbul Convention, in eradicating so-called honour killings in Turkey.

So-called 'honour killings' have become an issue of concern for the international community. In Turkey, in particular, the practice still exists despite the adoption of the relevant human rights instruments. The book argues that the improvement of the status of women in Turkey in accordance with gender equality as well as the application of the principle of state due diligence, both requirements of the Istanbul Convention and international human rights law, are fundamental means towards eradicating the killing of women in the name of 'honour'. Using feminist approaches, in particular the intersectionality approach, the study looks at the application of such standards as well as the current obstacles. Through such a lens, the study discusses the strengths and weaknesses of the Turkish Constitution, Turkish Civil Code, Turkish Penal Code and Law to Protect Family and Prevent Violence Against Women and questions the judicial approach to the implementation of the women's right to life. It identifies the lacunae in the Turkish legislation that allow inadequate legal protection for women and the inconsistency of the judicial approach to the definition of the so-called honour killings in the judgements. The study then recommends some concrete amendments to the relevant legal provisions in order to better reflect the international framework and the feminist approaches.

The book will be a valuable resource for academics, researchers and policy-makers in the areas of international human rights law and feminist legal theory.